How to Treat Animals

A Scientific and Spiritual View — II

Introduction
In part I of this article we learned that most scientists agree that all vertebrates
— mammals, birds, reptiles, amphibians, and fish — are conscious to varying degrees, have feelings, and can suffer pain. From a spiritual perspective there appears to be a strong suggestion that animals have a soul, often a group soul, but there are surely animals that have al- ready been individualised. And there are clear indications of reincarnation of animals, as appears from conversations with these animals. In this part 2 of the series of 3, we will try to answer the question of how we should treat animals with this knowledge, after looking at the effects of our current relationship with animals in intensive livestock farming.

Should we discern between groups of animals?
This is a very difficult question to answer. Still, I will try. From the introduction above, can we conclude that the other animals, for example, insects, are less valuable or even less worthy? And what do we think about bacteria and fungi? For example, we have long viewed insects as troublesome or even reprehensible creatures. But now that the world is facing an 80% decrease in the insect population due to the use of agricultural poison on land, and this is starting to have consequences for human life, we are forced to change the way we think. Insects play an important role in the Gaia ecosystem, as they are at the bottom of the food chain, and small animals and fish depend on them. The story of the bees is well known, they are responsible for pollinating many plants that are important to us humans for our survival. It seems that we have long underestimated the importance of insects. 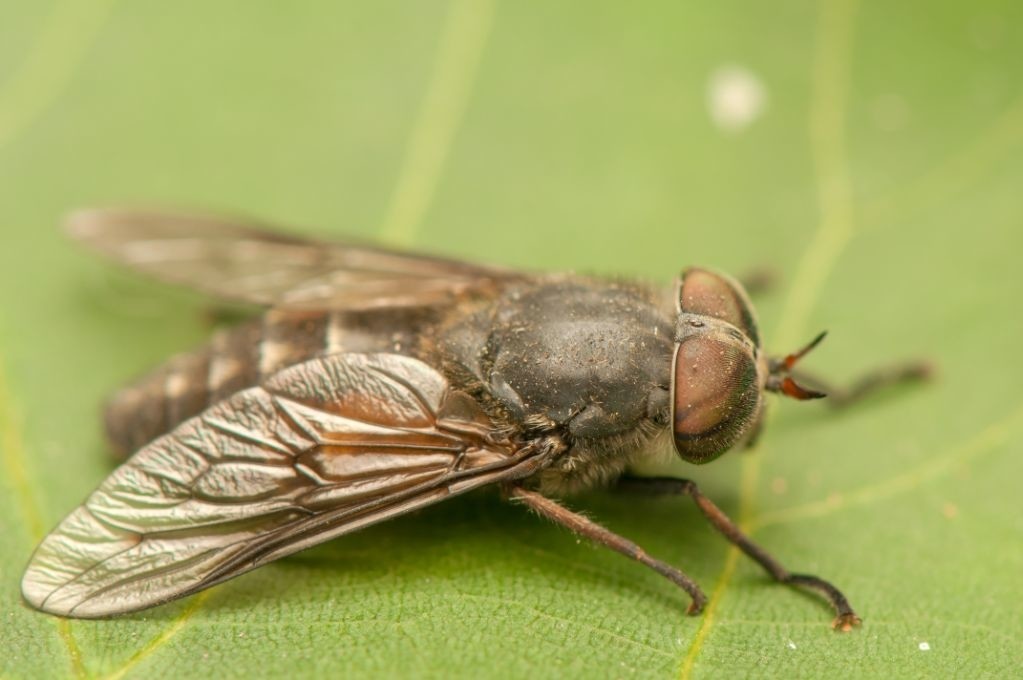 The fly also plays a role in the Earth’s entire ecosystem (Photo: Depositphotos)

And when you read the stories of Piek Stor [1] a fly suddenly sounds very different. She writes about her conversation with a fly on her houseboat. She shares honestly that she is a bug swatter. The fly says: “Could we possibly coexist? Insects also belong here.” It knows that people want a clean world by removing insects. “We are here for a reason. The balance disappears due to human interference. You can ask us to go somewhere else. There is plenty of space.” But then the fly infestation comes in the summer and Piek asks the fly — it turns out to be a spokesperson for all the flies — whether it is possible for there to be less of them. “That depends on how you look at it.” It is a bit tricky for Piek. She thinks there are too many of them, but she also has a young common swift to hand-rear, and the flies could be used for that. The choice for the flies is: move or serve as food. “That is possible, that sounds reasonable. Serving as food is something completely different than disappearing into the bin. Moreover, we can return as a fly.” Finally, the flies that stay inside are willing to serve as food, the others leave.
Many bacteria and fungi are important for a healthy soil and we humans are in turn dependent on this through our food chain — the 38 trillion bacteria that live in our colon and digest our food for us. They are also important and deserve our protection, even though we hardly notice their existence.
The question remains: should we distinguish between groups of animals? It seems that all animals, including insects, worms, cockroaches, bacteria, and fungi play a role in the ecosystem, and even though we may not understand that role, we cannot just let them fade away. Although, when I think of that tick . . .

How do farm animals live nowadays?
The biggest problem in our interaction with animals lies with how farm animals are treated — they are often housed inintensive livestock farming. Here are a few statistics indicating the size of the industry: There are around 1 billion pigs, 1.5 billion cattle, and 50–60 billion chickens, totalling 70–75 billion animals per year. These animals are hardly, with a few exceptions, considered living creatures that can experience pain and stress, but are seen as machines for the production of meat, milk, and eggs. They are bred in the most “efficient” way so that they produce more milk and meat or lay more eggs in a shorter time. The length and quality of their existence is determined by their economic value. Animal welfare only plays a role as enforced quality.
In addition to the land animals, 2.7 trillion animals are fished from the sea every year. Around 75% of global fishing areas are exploited or are already exhausted. About 40% of the fish caught is thrown away because it is of the wrong species or too small. A study “Mapping the Global Distribution of Livestock”, published in 2014 in the Plos.One magazine [2] shows that “All captive-bred animals worldwide weigh around 1 billion tonnes. For comparison: the total world population weighs around 500 million tonnes. Wildlife weigh around 40 million tonnes.” This ratio will not have improved five years later.
We owe this thinking about animals as machines to one of the great thinkers of our Western history, Descartes, who put man at the centre of the Universe in 1637, because he has a “mind”, while animals are only objects, things that are incapable of thinking. The fact that this worldview is totally outdated in today may be clear from the many scientific publications on animal intelligence and on the ability of animals to have feelings and pain. 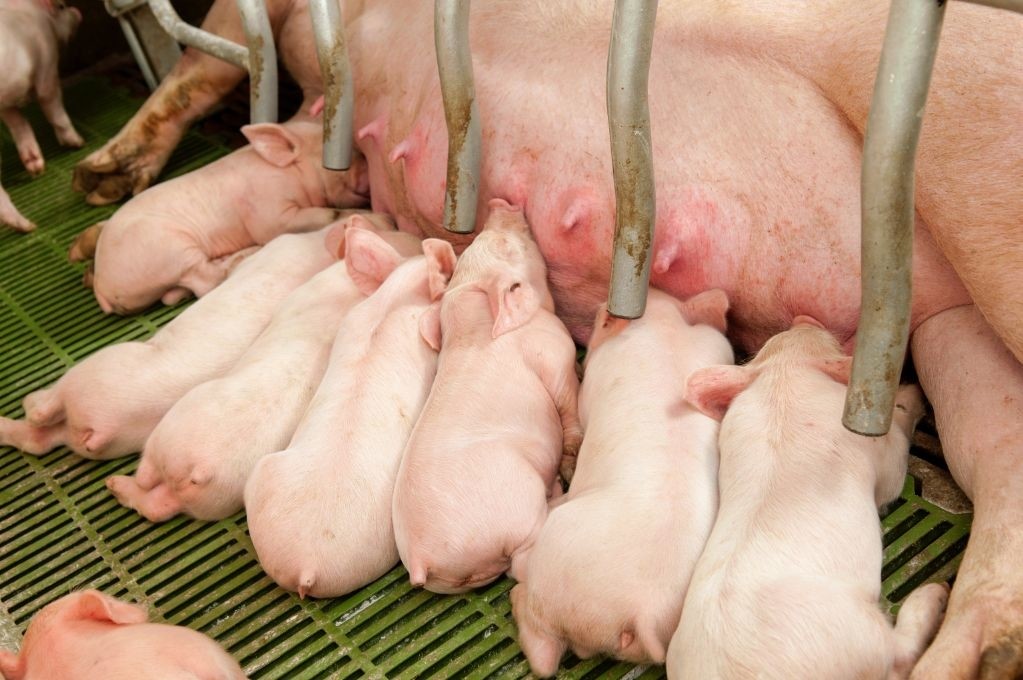 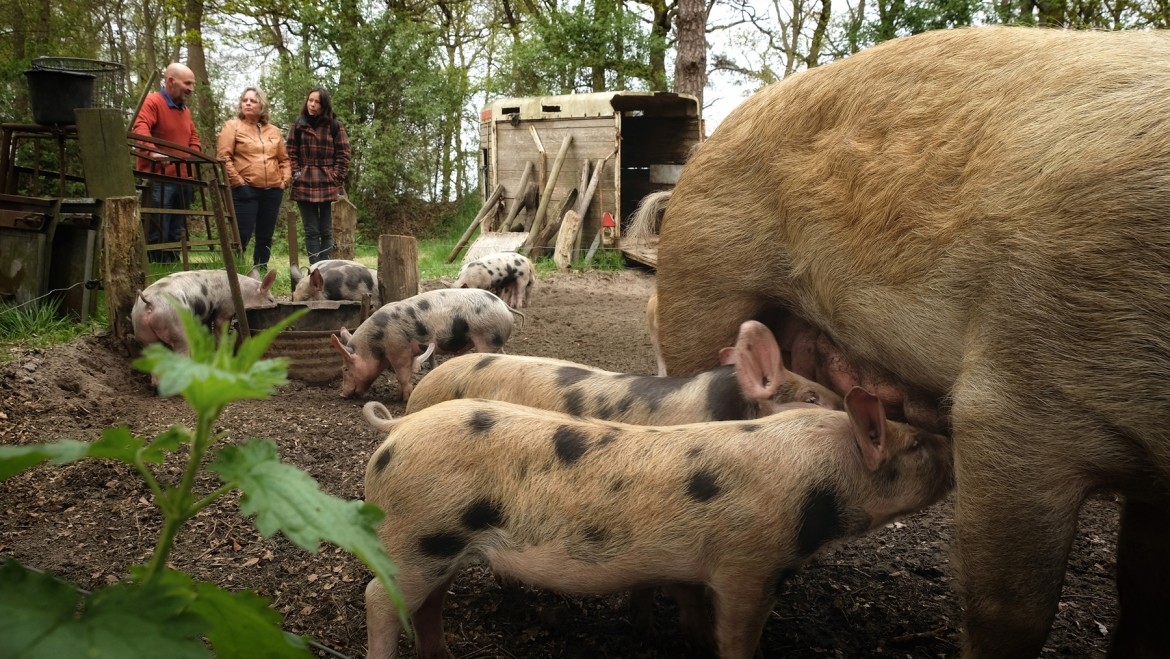 Above: pigs in intensive livestock farming, the usual manner of a delivery room (Photo: Depositphotos). Below: pigs on farm Panhof in Dalfsen in the Netherlands, where the piglets grow up in nature with the mother sow (Photo: Panhof Dalfsen)

There is a need to find a way to treat animals differently than before. We mainly see this in intensive livestock farming and in agriculture, with the enormous quantities of pesticides used in the latter.

Should we give animals rights?
It is clear that carnivores do not want to dwell on how animals are treated in the meat industry, but in the entertainment industry (circuses and films), zoos, labs, and other situations also, animals play a role that is not in line with their own existence. This can only be changed if we give animals rights that protect them. Perhaps we should see this in the con- text of an increasingly conscious civilization. The black slave trade started in the 16th, 17th, and 18th centuries because there was a need for cheap, strong and healthy labourers. This was only possible because the white race considered it- self superior to the coloured people of Africa in particular. Slavery was gradually made illegal during the second half of the 19th century. Parties that made a profit out of it struggled for a long time, but in the end, everyone agrees that this is a deplorable page in the history of humanity, although unfortunately it still exists illegally in many races and ages around the world.

Parallels between slavery and intensive livestock farming can clearly be drawn (source: http://verenoflood.nu/schuld-aan-slavernij/)

The parallels with intensive livestock farming are obvious. But there is increasing awareness that the way we treat animals is no longer acceptable. In this sense it would help enormously to create laws that protect them, really protect them, instead of offering them a life only a little less horrendous. Animals must have fundamental rights of their own.
A pig has its own will. When people regard and treat pigs as their property, we make their fundamental interest in self- determination subordinate to our wishes. The point is that we give beings rights based on their own nature. A pig has the right not to be a possession and not to be used as an instrument. That applies to every animal that has the capacity to suffer. There is no logic that justifies drawing a hard line between people and other animals [3].
Animals are things by law. You can own them and do with them what you consider useful or necessary, within the limits that we have set by law. That is why we need to change the legal status of animals. We must recognise that they are like people in many ways. They have their own character, their own will; they are unique individuals who have the capacity for feelings.
The karma that humanity creates by this cruel exploitation and the killing of animals has never been so intense. Tolstoy said: “As long as there are slaughter- houses, there will also be battlefields.” I would add to that human torture and slavery. And Richard Branson said: “I believe we will look back and be shocked at what was accepted — the way we kill animals en masse for food.”

What is the environmental impact of the meat industry?
The production of animal food en- tails costs for a lot of raw materials (such as fertilisers, pesticides, fuel for agricultural vehicles, and so on, and accounts for more than a quarter of all man-made green-house gas emissions. The vast majority of these emissions, up to 80% of that 25%, is the result of live- stock farming.
Meat and dairy are not an efficient way to feed the world’s population. The efficiency of the conversion from animal feed to animal food is largely inefficient. For example, only 3% of vegetable calories are converted into calories in beef, a loss of nutritional value of 97%. The yield is better for other meats, but still only 20% for chicken, the best-scoring category of meat.
Research shows that without meat and dairy consumption global agricultural land use could be reduced by more than 75%, an area equivalent to that of the US, China, the European Union and Australia combined, and the world can still be fed. Loss of natural areas to agriculture is the main cause of the current mass extinction of wildlife [4].
This new analysis shows that while meat and dairy products only contain 18% of calories and 37% of proteins, it uses the vast majority, 83%, of agricultural land and produces 60% of agriculture’s greenhouse gas emissions. Scientists have also found that even the lowest impact of meat and dairy products still causes much more damage to the environment than the least sustainable vegetable and grain crop.
Humans make up only 0.01% of all life, but are responsible for destroying 83% of wild mammals.

Conclusion
We cannot go without a single animal species in the ecosystem. If we think that we can do without insects and therefore use a lot of pesticides, this is turning against us. Insects are an essential part of biodiversity.
In today’s intensive livestock farming, animals are used as machines for meat, milk, and eggs, and mostly also treated that way. In light of our current know- ledge, this is no longer acceptable. In addition, intensive livestock farming makes a major contribution to global warming. It is inevitable that we are going to give animals rights based on their own nature and capabilities. Avoiding meat and dairy products is the best way to re- duce animal suffering associated with intensive livestock farming and its environmental impact on the planet.

This article originally appeared in The Theosophist in November 2019.

Endnotes
1. Piek Stor, In the Silence You Hear Everything.
2.